Good AM out of Hughes marina. 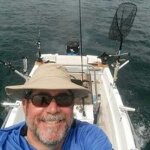