Anyone try the newer 3d sonars like Raymarine RealVision 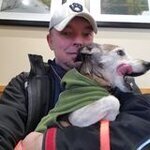